Declawing and the Law 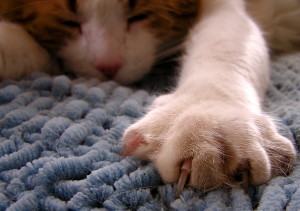 The barbaric procedure of cat declawing is under serious fire, as well it should be!

After being banned in eight California cities by the end of 2009, there have been efforts–led by the Paw Project–to get declawing banned elsewhere. Until recently, those efforts had failed relatively early in the process.

It’s been said that “Laws are like sausages — it is best not to see them being made.” Indeed, it’s messy. I’ve been involved in legislative processes in Colorado and California, and the typical abysmal ignorance of legislators about the very things they are regulating is fairly stunning. It’s difficult and frustrating to try to educate lawmakers so they can make an informed decision.

Even at the local level, proposed new laws have to go through several steps, and those are magnified at the state level. First, a legislator has to be convinced to introduce a bill. Then it goes to a committee, who decides whether the full body (e.g., council, assembly, house, senate, etc.) should even see it. That’s often where bills stall or die.

If it is approved by the committee, then the bill moves on to the appropriate body for another vote. Locally, that’s usually just one step to the city council or board of supervisors. At the state level, though, it’s usually a bicameral (made up of two) body, like the House and the Senate in the federal government.

Some folks have asked why we don’t just go for a federal law. The answer is that veterinarians are governed at the state level, and at this point, that’s where the laws need to be. The USDA already banned declawing of exotic carnivores (big cats, wolves, bears, etc.) for entities covered under the Animal Welfare Act, like zoos, laboratories, and circuses; but for now, that’s probably all that can be done on the federal level. That may change as our movement gains momentum.

In November, 2017, the City Council passed a declaw ban in Denver, Colorado, making it the first city outside California to do so.

In New Jersey, the anti-declaw bill actually passed in committee in 2016, and made it to the floor of the State Assembly, where it also passed; but there it languished. It was re-introduced in 2017, and will be again in 2018.

A similar bill has been introduced, and re-introduced, in New York; but has met with obstinate opposition from the state veterinary medical association.

So how do we, as concerned cat lovers, help this kind of legislation successfully pass the next phases?

State lawmakers generally pay attention only to their constituents–people who actually live (and vote!) in their districts. Phone calls, letters, emails, and forms submitted via legislators’ web pages, really only count if they are from locals… or from people who do a lot of business or travel in the state, and whose tourist or business dollars might stop flowing their way. If that’s the case, do say so in your communication. For instance, if you had called the Beverly Hills city council members when they were considering a declaw ban, and said “I will never shop on Rodeo Drive AGAIN,” that might have worked! (Beverly Hills, of course, did pass their declaw ban!)

We will need your support again when the declaw ban comes up again in New Jersey and New York states.

Please sign up for email updates at the Paw Project, and follow on Facebook those who are really hitting this hard, including the Paw Project,City the Kitty, and of course Little Big Cat,  as well as other anti-declawing groups. There are a lot of us out there, and social media is facilitating connections and movements that are pushing legislators in a more humane direction.

If you are a declawing activist, cat advocate, or if you don’t understand what all the fuss is about or why we are trying to have declawing banned, please download our free ebook explaining all about declawing, and why it is necessary to outlaw it legislatively.

Thanks for all you do, and for loving cats!