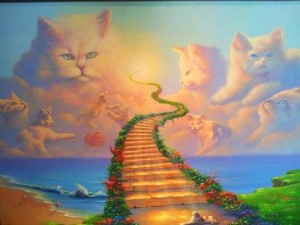 So close to the holidays, this might seem an odd subject to bring up, but there’s a very good reason for it.

When I was in practice, I noticed that we wouldn’t have a death or euthanasia for weeks, then we’d get a rash of them all at once. But there was a reason, many other veterinarians have also seen it, and it turns out to be very simple. Veterinarians see the most deaths around the solstices and equinoxes, with the weeks before and after the Winter Solstice being the most common time for animals to die, whether assisted, or on their own.

(This may also account for the higher number of human deaths around Christmas–which is, of course, only a few days from the Solstice.)

Why is that? Who knows! Maybe the “veil” between this world and the next is thinner around those times. Or maybe because they’re natural times of transition… one season to the next, one form to another.

In any case, I know that many people are dealing with the death of a loved one–whether human or animal–right now, or they are about to. So this actually is a good time to share a few thoughts about euthanasia.

Why do we fight death? Why do we think of death as an “enemy” instead of the most natural part of life? Everything that is born will die: that is the Circle of Life.

Part of the problem is the medical establishment, which treats every illness as a combatant, with death being the fiercest and most implacable opponent of all.

The other issue, of course, is that we don’t know for sure what happens when we die. A lot of us think we know, and a lot of us are quite sure about it, but we don’t actually KNOW with certainty.

My own belief was beautifully expressed by John Lennon:

“I’m not afraid of death because I don’t believe in it.
It’s just getting out of one car, and into another.”

I know several animal communicators, and have gotten many messages from animals on the “other side.” My own cat Spirit (for whom Spirit Essences were named!) came through after her death at age 20 (the day before the Summer Solstice, as it happens). She said “Thank you, thank you, thank you! I forgot how great it is over here! I’m so happy and free … and… I can FLY!”

With that kind of reassurance, I just don’t worry about death any more. In fact, I think it will be greatest adventure ever!

As a veterinarian, I’ve seen a lot of animals die. I’ve helped many of them do so. And I do see it as helping. Euthanasia is a great gift for animals, when used with care and conscientiousness.

When the alternative is a painful, inevitable decline, I think death is probably very welcome. My own philosphy is that I would rather euthanize a day too soon than a day too late; I want to prevent suffering, rather than desperately rush to end it after it becomes obvious. This is especially true for cats, because they hide suffering brilliantly, until it is so overwhelming that they cannot conceal it any longer. By the time we notice there’s something wrong with a cat, it has likely been going on for quite some time.

People are always afraid that they won’t “know” when it’s time. Yet when I’ve examined the animal, and suggested that they might want to consider euthanasia as one option, they always said, “Yes, I knew you were going to say that.” They knew. Of course, I doubted my own silly self when it came to my own animals–yet when the moment came, I really did know. And you will, too.

In any case, I am sure that any decision you make from your heart, out of love, simply cannot be wrong. Your pet will understand. Animals are, after all, better than we are: they don’t hold grudges!

If you’re facing a difficult decision about your beloved animal companion, here’s a wonderful, compassionate article by a wise veterinary technician: “5 things I wish you knew before euthanizing.” Even if you’re not in such a position right now, these tips may be very helpful, one day down the road.