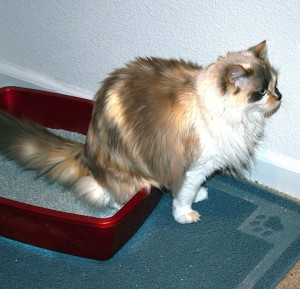 Few conditions strike greater fear into the heart of a cat guardian than urinary tract problems. Myths and misinformation abound, and many people know at least one other person who has a cat with a urinary problem–or who has lost a cat because of it.

Urinary bladder issues in cats come in several varieties. In general, these are idiopathic cystitis (bladder inflammation of unknown cause), which describes about 80% of cases; cystitis with crystals; and cystitis with bladder stones. All of them together affect less than 3% of cats, but that still makes it one of the most common reasons for veterinary visits, according to pet insurance providers.

Just to add to the abundant confusion on the topic, the terminology has changed many times over the years. Originally, it was called “Feline Urologic Syndrome” or FUS. Then for many years it was referred to as “Feline lower urinary tract disorders” (commonly referred to as FLUTD, LUTD). Another modern interpretation is “Feline Interstitial Cystitis” or FIC, to reflect its similarity to interstitial cystitis in women. “Lower urinary tract signs” (LUTS) is the most comprehensive term, so we’ll use that for now.

Currently, LUTS are being discussed as part of a larger picture called “Pandora Syndrome,” a set of stress-related disorders affecting more than just the bladder. Affected cats tend to be nervous and more easily-startled than average cats. They may have digestive or other problems along with LUTS.

Bladder issues occur equally in both male and female cats, although males are at risk of life-threatening blockage of the urethra. It is usually first seen in cats between 2 and 7 years of age (though some very young and very old cats may develop signs). Episodes of LUTS are usually triggered by stress, such as home remodeling, parties, severe weather, or loss or addition of a family member. These problems are also more common in the spring and fall and after major holidays.

What are the Lower Urinary Tract Signs?

The clinical signs of all the LUTS are very similar. Cats may go to the litterbox frequently, strain to urinate, pass very small amounts at a time, lick their genitals more frequently or more intensely than usual, or have blood in the urine. The cat may associate the burning sensation of cystitis (bladder inflammation) with the litterbox itself, and look for another place to go where it won’t hurt. This leads to squatting in corners, in sinks or tubs, on rugs, laundry piles, or beds.

Most cats brought to the vet for LUTS do not yet have blockages. However, it’s important to act quickly when you see any of these signs, because if a blockage does occur, the backup of urine toxins and pressure can lead to kidney failure and death in as little as 24 hours.

Most LUTS involve bladder inflammation alone. It is rare for bacteria to be involved–most are “sterile” inflammations. (However, elderly cats and diabetics are more prone to bacterial infections.) Less common causes of these signs include behavior disorders, kidney stones, anatomical defects in the bladder wall, other systemic diseases, and bladder cancer.

Only about 20% of LUTS cases involve bladder stones–about half of these are struvite, and half are calcium oxalate stones. Crystals are microscopic, and even though they may clump together, they are not the same as stones. Male cats who block usually do so with crystals held together with mucus made by the irritated bladder. This “plug” typically gets stuck at the narrow end of the urethra. Crystals may be present by themselves or at the same time as a stone. Occasionally, multiple types of crystals may be present at the same time.

Struvite, or “triple-phosphate” stones, are made from normal components of urine (magnesium, ammonium, and phosphate) that adhere together under certain conditions. Calcium oxalate crystals and stones, which were once rare in cats, have become much more common due to increased feeding of highly acidified struvite-treatment diets. Currently, about half of analyzed stones are struvite and half are calcium oxalate. (There are other types of stones but they are uncommon in cats.) Struvite stones can be dissolved by diet; but other types of stones cannot be dissolved, (although diet can help prevent recurrence).

Crystals and stones form in concentrated urine. It’s kind of like particles in a bucket. If there’s lots of water, the particles floating around are unlikely to encounter each other. But if there is only a little water, the particles get crowded together–they’re more concentrated. When they bump up against each other, they stick. Without much space to float, more and more particles stick together and form crystals. Crystals bump into and stick to other crystals, and eventually form stones.

Any stone can be surgically removed, and sometimes this is the most expedient solution. Stones are usually diagnosed either by radiographs (x-rays) or, ideally, ultrasound (which can “see” stones that x-rays might not reveal, and provides valuable information on condition of the bladder and kidneys). Cats with LUTS lasting more than a week in spite of treatment, or if the problem recurs after treatment is discontinued, should be evaluated for stones or other abnormalities. Ultrasound is the most effective tool for diagnosing problems in the bladder. It can detect crystal clumps and small stones that radiographs (x-rays) would likely miss.

There are many medical diets made to dissolve struvite stones and to prevent recurrence of struvite and calcium oxalate stones. They are only available through veterinarians, since they create specific acid-base conditions in the cat’s body that should be monitored by your vet. Canned versions of these foods are vastly preferable to dry, although none of them contain the high quality ingredients we recommend, consisting mainly of by-products and grains.

In one study, 60% of cats on a single dry food were symptom-free for a year, compared to 90% of cats eating one canned food. Homemade, organic, natural diets are always on the top of the “good” list for treating this and other chronic disease conditions, but only if they can be fed consistently. Diet changes should be made gradually to minimize stress on the cat.

Diet is a major contributor to LUTS. Dry cat foods, particularly high-fiber “light” or “senior” foods, contribute to overall dehydration and high urine concentration: i.e., more particles and less water in the bucket. The goal is to add much more water to the bucket. As the saying goes, “the solution to pollution is dilution.”

Studies have shown that cats who eat dry food and drink water separately consume half the amount of water that cats eating canned food get. We want as much water as possible moving through the kidneys and flushing out the particles before they can stick together and cause problem.

Cats with LUTS should not be fed any dry food at all. Canned, raw, or homemade foods help keep the urine dilute, which minimizes irritation and lowers the risk of crystal or stone formation. It’s best to feed in timed meals rather than leaving food available 24/7.

Antibiotics are often used to treat feline LUTDs, although they have fallen out of favor among experts. Even though bacteria are rare, some antibiotics have anti-inflammatory or analgesic (pain relieving) effects. Other anti-inflammatory drugs, such as steroids, are occasionally used when there is severe inflammation. Urinary acidifiers are sometimes given if the urine pH is very high. Steroids and acidifiers should not be used long-term. The antidepressant amitriptyline has been used as a long-term treatment, but some research suggests that it actually increases recurrence. For male cats who block repeatedly, there is a surgery to widen the urethra. This is a last-ditch option, and some males will still block even after this surgery.

Many herbal and nutritional treatments have been tried with varying success. Certainly, antioxidant vitamins such as C and E, which are also helpful in times of stress, are indicated (Vitamin C as sodium ascorbate or Ester C, and Vitamin E as dl-alpha tocopherol; not the d- form, which is synthetic). Other antioxidants such as BioSuperfood may also be helpful, because of their anti-inflammatory action. Herbs such as slippery elm, horsetail, and couch grass have helped some cats. Many cats have done well with Co-Enzyme Q10, which prevents inflammation at the cellular level.

Cranberry extract is beneficial for many animals, especially dogs, who tend to have actual infections of the bladder. Cranberry is thought to prevent the attachment of the E. coli bacteria to the bladder wall. Because bacteria are not present in most cases of LUTS, it may be less beneficial for cats. However, cats being cats, cranberry may still be helpful, even without any evidence of bacteria. Cranberry capsules are available at the health food store (typically in 250 mg strength which is a good once-a-day dose for cats), and are very safe to give long-term.

Essences are very helpful for LUTS. Because the problem is so highly stress-related, addressing any underlying emotional imbalances and susceptibilities can be critical for long-term resolution. The Jackson Galaxy Solution formula “UR-Fine” is specifically designed to reduce stress and keep the urinary tract supported and balanced.

Environmental enrichment is also important for these cats. A bored cat can easily become a stressed cat. Exercise is a good way to reduce stress as well as weight, given that a large percentage of cats with LUTS are overweight.

Holistic veterinarians believe that LUTS is a sign of underlying chronic disease. Homeopathy, acupuncture, Chinese herbs, western herbs, and other holistic therapies may be valuable in rectifying the hidden “causes” of LUTS and bringing your cat’s health into balance and well-being.

There are lots of diets and treatments out there. An individually tailored treatment program is needed for each patient. But, if I had only one rule I could make for all of them, it would be “no dry food.”