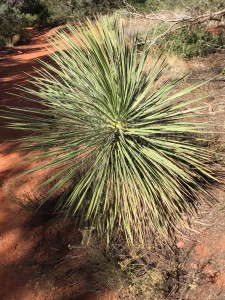 There have been a few myths about the desert plant Yucca schidigera floating around the internet. In particular, some are suggesting that yucca is not safe as a daily supplement, even though it’s present in many pet foods. So it’s time to set the record straight!

Yucca is an extremely versatile and useful plant, but in large doses it is seriously irritating to the entire GI tract. There’s a lot of it growing wild around my Colorado home, and it’s definitely not a plant to mess with—it has very stiff, sharp-edged leaves that would indeed be very uncomfortable to chew on! Yucca is listed as “toxic” in the ASPCA database for this very reason. However, in reasonable doses, powdered yucca is perfectly safe, even if given every day.

The reason I like yucca in pet foods is not just because it reduces fecal odor, although that is certainly a bonus! Yucca is an excellent source of fiber, vitamin C, beta-carotene, and B vitamins, as well as several minerals; and it actually helps the body absorb nutrients so the animal can get maximum nutritional value from the food.

Yucca also has proven benefit for arthritic pets. It’s recommended as an arthritis supplement by many holistic practitioners for both people and pets. Now, since anyone who has arthritis has it every day, the supplement would obviously also be taken every day. But nobody seems to be worried about that, even though the doses are far higher than anything in pet food.

The original source of concern appears to be from the Greg and Mary Wolfe Tilfords’ book, Herbs for Pets: The Natural Way to Enhance Your Pet’s Life (2011). Overall, this is an excellent book, one I refer to frequently. In fact, I have it in both hard copy and ebook, so I can quickly get to it no matter where I am! However, new research has expanded and in some cases disproven what was thought when the book was published.

The Tilfords speculate that the odor-reducing effects of yucca are due to some kind of metabolic change. But research has shown that, on the contrary, the carbohydrates in yucca bind directly to the “odiferous” molecules, thus keeping them from aerosolizing and wafting toward one’s nose. There are no metabolic changes involved.

The urease the Tilfords are concerned with is actually produced by gut bacteria, so inhibiting it does not interfere with the animal’s own metabolism.

Yucca’s odor-inhibiting effects are completely unrelated to any metabolic process. It happens in a petri dish exactly the same way it happens in the gut.

The saponins in yucca have been well-studied. Yucca has been shown to kill Giardia, reduce arthritis pain, and even prevent certain cancers. While the results of its anti-arthritis action seem similar to steroids, yucca‘s mode of action is nothing at all like drugs.

There are many herbs that should not be given continuously; echinacea and licorice readily come to mind. However, yucca is not one of them. At the low levels present in many pet foods, I have no concern whatsoever about any potential ill effects. Nor do I have concern with it as a supplement in higher doses. In fact, the Tilford book specifically states that “yucca is safe when fed in moderation.” A very safe dose is up to 50 mg per day (though most cats won’t need that much).

Personally, I have added yucca powder to my cats’ food for many years, especially as they get older. I tend to add a lot more than what is in pet food, and have never observed any problems. It has almost no taste, so cats don’t object to it. (However, do add extra water to the food, since the yucca will absorb quite a bit of moisture.) You can also give yucca as a treat, supplement, or herbal extract such as  NaturVet Joint Health Level 3 Advanced Joint Support Dog & Cat Powder Supplement, Ark Naturals Joint Rescue Super Strength Chewables Dog & Cat Supplement, or Animal Essentials Yucca Joint & Digestion Herbal Extract Liquid.