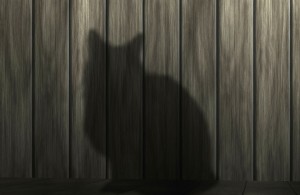 There is an ongoing debate in the science community about cats. That is, are they fully domestic, or are they still essentially wild? The premise is that unlike dogs, who are thoroughly domesticated in mind and body, it’s unclear just how wild or domesticated our cats may truly be.

As a veterinarian, I can tell you that individual cats run the full gamut. Some kitties are totally relaxed and docile, and others more resemble an angry rattlesnake! Complicating the issue are feral cats, who are as wild as any other wild animal, and pet cats who live alongside (and sometimes interbreed with) true wildcats in Scotland, Europe, Africa, and Asia. This causes many experts to consider the cat only “semidomesticated.”

A group of researchers led by Washington University in St. Louis, MO, recently completed the first high-quality feline genome analysis (based on DNA from an Abyssinian cat named Cinnamon). This was combined and compared with a variety of breeds and wild species to create a more complete picture of feline evolution than anything available before. They used this data to assess the differences between cats, wildcats, and tigers, as well as in relation to humans, cattle and dogs.

The domestication syndrome is obvious in dogs, who have been domesticated much longer and subjected to much more intense selective breeding than cats. The Pug is a great example: huge adorable eyes, ear 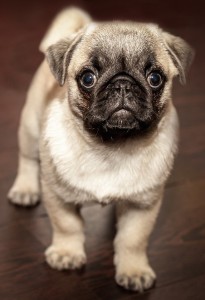 flaps, curled tail, and mellow, friendly temperament. (Yeah, I just wanted an excuse to put in this cute picture of a Pug puppy!) Dog puppies have a longer socialization period and are friendlier toward humans, compared to wolf cubs. Most female dogs come into estrus (heat) twice a year, while their wolf cousins have only one litter per year. Dogs’ brains are significantly smaller, proportionally, than wolves’ brains. (My co-author, Celeste Yarnall, and I discussed the evolution of dogs from wolves, as well as the fascinating 50+ year experiment with Russian silver foxes, in our book, Paleo Dog.)

Our kitty cats, on the other hand, are built just like any wild cat, large or small (notwithstanding selectively-bred alterations such as long hair and short faces). While big cats usually only have one litter per year (it takes longer to produce 2-lb. cubs than 3 oz. kittens!), small wild cats and housecats often have two, and potentially even three litters per year. So we can’t really differentiate our cats from wild cats on the basis of reproduction.

Other unique feline features, such as acute hearing and increased night vision, apply to all cats. And, as obligate carnivores, domestic cats have the same nutritional requirements as any wild cat.
However, the team did find 281 genes that showed evidence of rapid or numerous genetic changes, which implies strong selection pressure; in other words, domestication.

The changes occurred in a variety of systems, but the researchers believe that the most important were those in the nervous system. Individual wildcats who were less fearful and more motivated by food were the likely foundation of the domestic cats we know today. The researchers conclude, “Our results suggest that selection for docility, as a result of becoming accustomed to humans for food rewards, was most likely the major force that altered the first domesticated cat genomes.”