Science has discovered what many cat-lovers have known for years… most cats depend more on their vision than on their sense of smell! 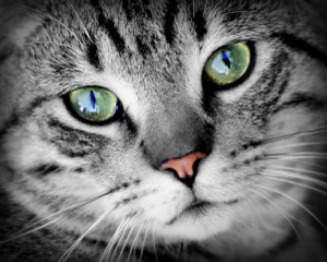 I could have told you that when I brought my freshly-shaved dog home one summer afternoon. My “watchcat” Spencer took one look and attacked instantly, drawing blood on both the dog–and on me, when I tried to intervene. He didn’t spend a nanosecond analyzing any smells… it was a lightning reflex arc from eyeballs to claws!

But to give science credit, the British researchers did develop a clever way to test their hypothesis (which was that cats depend more on their sense of smell). (Read more about study details here.)

While smell is still very important to cats, it is much less so than for dogs.

The experiment tested only six cats; and one did rely more on smell, so the researchers made a good point: “Different cats had quite fixed preferences, and this may have important implications for their welfare. If there is a cat which has a strong preference for using its nose, then simple changes in the smell of the environment might have a big impact on it, whereas, for others it may be insignificant. This work provides a unique insight into the important principles of attending to the needs of the individual rather than the population in general for good welfare.”

If your cat seems particularly mesmerized by smells, that may affect the best types of environmental enrichment you might want to provide. While most cats, it seems, would prefer a window seat, food puzzle toys may be more interesting to a “nosey” cat.

The findings have implications for things like litterbox cleanliness and marking behaviors. It also helps explain why some cats are greatly helped by products like pheromones and catnip sprays, while others are not as affected.

I just hope cats don’t develop a fashion sense to go along with their amazing vision… my customary sweats and t-shirts (a perk of working from home) would probably get just as badly criticized as the dog’s haircut! Ouch!