2. Making Decisions in a Crisis

4. Which Omega-3 Supplement is Best?

Stay away from Chinese chicken: Even though it is in the middle of a bird flu outbreak, and despite a ban on chicken for human consumption, China is still exporting chicken for pet foods and treats to the U.S., and U.S. companies are still buying them. Since 2007, the U.S. Food and Drug Administration (FDA) has issued multiple warnings about Chinese-made chicken “jerky” treats that cause a particular type of kidney failure called Fanconi’s syndrome. As of December, 2012, FDA had received thousands of reports, including 501 dog deaths and one cat death. FDA has repeatedly tested for its standard panel of contaminants, and even went to China to “inspect” the plants (they were allowed to see only four facilities, and were not allowed to do any testing), but has not found a cause. In general, jerky is not cooked to a temperature that would inhibit bacterial growth. Additionally, testing by the State of New York have found five different antibiotics in jerky treats: sulfaclozine, tilmicosin, trimethoprim, enrofloxacin and sulfaquinoxaline, which are all permitted in China. However, four of them are not allowed in U.S. poultry, and the one that is allowed tested above allowed levels. Nestlé Purina and Dogswell, among many others, continue to import jerky treats from China for sale to U.S. consumers.

New poison puts pets at risk: A new rodenticide (rat poison) called bromethalin recently came on the market in the U.S. It is far more deadly than first-generation warfarin-based anticoagulant poisons that cause rodents to bleed to death internally. There is no test for bromethalin, and no antidote. It has the potential for serious, even lethal toxicity in dogs, and more so in cats, who get into it or eat a rodent that ingested it. The use of this new toxin is thanks to EPA rules that went into effect in 2011. The rules’ intention was to make rodenticides safer, but it is apparently having the opposite effect. Bromethalin takes effect much quicker, and is harder (and more expensive) to treat, especially once the animal is showing signs, which include: depression, abnormal behavior, ataxia, hypersensitivity, seizures, and coma.

Most vets prefer dogs: According to a survey by Bayer Animal Health, the top five states for “cat ownership” are: Vermont, Maine, Oregon, South Dakota, and Washington. There are more pet cats (74.1 million) than pet dogs (70 million) in the U.S., but more veterinarians describe themselves as “dog people” (48%) than “cat people” (17%). We could have told you that! A feline-only vet clinic is usually better for your kitty pals, if you have one in your area.

“Safe” antifreeze: Manufacturers of ethylene glycol, the car antifreeze and engine coolant, have volunteered add a bittering agent to all their products for sale in all 50 states. Theoretically, pets drink spilled antifreeze because it is sweet. That’s nice, but there are still two problems: first, it isn’t all that sweet (I tasted it myself); and second cats don’t taste sweet because they lack the taste buds for it. Moreover, cat who accidentally steps in antifreeze will lick it off no matter how unpleasant it is; and that tiny amount is enough to kill.

Does your music annoy your cat? There have been quite a few studies showing that certain types of music are soothing to animals, from cows to pets. In general, classical music (especially Mozart) has a better effect than raucous rock. Cats in particular prefer music that sounds like purring or suckling; and has a similar pace to a cat’s heartbeat (a relaxed cat’s heart rate is typically around 140-160 beats per minute). (Click here to read article.)

First Aid for Cats: April is National Pet First Aid Awareness month. PetPlace.com has some great articles, including one on first aid for cats, and a more detailed article (including video) on how to do the Heimlich Manuever if your cat (or other pet) is choking. Of course, you should read these now and not when you’re in the middle of an emergency!

1. Making Decisions in a Crisis

Speaking of emergencies, clinical bioethicist Viki Kind and certified thanatologist Heather Merrill have produced an terrific guide on how to deal with a pet crisis. The free downloadable Caregiver Crisis Guide includes:

1. An overview of things that go wrong in how we cope during a crisis.

2. An overview of how we can improve how we cope and prepare for a crisis.

3. A worksheet to plan how you are going to handle the next crisis.

As they say, “failing to plan is planning to fail.” Even if your pet is young and healthy, it’s worth being prepared! The guide’s advice for making wise, informed decisions is priceless. You definitely need to read it and take their suggestions to heart–now! Click here to download the free PDF! Just one of the important tips in this guide is that “Caregiving is never about just one crisis. It is a long journey with many crises and decisions.”

Over the course of our pet’s lifetime, we will face one more more crises. This ebook contains the tools you’ll need to get through them as gracefully as possible. Just having the awareness this book provides will bring you immense comfort, as well as the wisdom and power to cope.

I also strongly recommend this book for veterinarians and their staff members to help them effectively and compassionately communicate with clients who are faced with difficult decisions. It would also be great to provide clients with copies on CD or printed out.

If you are a caregiver for a family member (or any other human), you’ll also want to read Viki’s book, The Caregiver’s Path To Compassionate Decision Making: Making Choices For Those Who Can’t.

(I can’t help bragging that Viki is my cousin…but despite all the summers we spent together as kids, I don’t have a single bad story to tell about her–she’s that amazing!)

Animal Wellness Magazine is the #1 integrative health and wellness publication. I’ve been writing for Animal Wellness for many years. It’s a wonderful resource that features the latest information in natural nutrition, holistic veterinary advice, natural products, gentle training techniques, much more.  The magazine sells  at Whole Foods for $6 per issue, but as a special offer exclusively through  veterinarians,  Animal Wellness is only $19 (1 yr, 6 issues) and includes 2 Extra FREE BONUS  copies if you use the Promo Code AWV010 – Subscribe securely on-line at: www.animalwellnessmagazine.com/subscribe or call (866) 764-1212 ext 405 from 9:30-4pm EST. (To view a sample online, visitwww.animalwellnessmagazine.com , click on SAMPLE on right side.)

I just finished the latest round of the “Litter Dance,” a trial period during which I try a variety of new litters on my four cats. 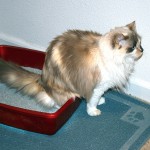 Fortunately they are amenable to these events, and this allows me a good chance to thoroughly evaluate the prime contenders. For other litters, I do a round of research (especially customer reviews) on new products or those I don’t want to inflict on my so-far willing subjects. I’ll bet that you’ll learn at least one thing you did not previously know about litter if you read this article! For example:

4. Which Omega 3 supplement is best?

I’m a total fanatic when it comes to Omega-3s–we and our pets simply can’t get enough from food, so we all need supplements! But there are so many products on the market! Fish, flaxseeds, cod livers, algae, krill, mussels…there are big differences among Omega-3 sources, and you can easily be fooled by their misleading claims. Click here to read our newest article on choosing the right Omega-3 supplement.

Moxxor is my personal favorite marine-source Omega-3 supplement for pets, especially cats and small dogs. The oil comes from sustainably raised greenlip mussels from the pristine Marlborough Sound in New Zealand. The oil is fresh, pure, independently tested and certified, and fortified with powerful antioxidants…but my very favorite thing about Moxxor is the tiny capsule size, which makes it easy-breezy to give to cats or small dogs. (I take it every day, and I give it to my healthy cats 2-3 times a week; or daily if they are having any health issues.)

Click here for much more information about Moxxor, including links for ordering from the U.S. and other countries. (This link will take you to the affiliate site.)

Note: If you decide you want to try Moxxor, you’ll definitely want to join as a preferred customer to get a 6-bottle, 90-day, money-back guarantee, as well as receiving the same discount that distributors get, with none of the obligation or hassle!