Tapping, Meridian Therapies, or “Energy Psychology, including EFT (Emotional freedom Techniques) are techniques based on points along traditional Chinese acupuncture meridians. Sometimes these are referred to as “tapping” because they involve stimulating certain points by tapping them with the fingers. EFT was developed by Gary Craig. Other techniques include EMDR, TAT, TFT, and BSFF.

The basic theory behind these therapies is that “the cause of all negative emotions is a disruption in the body’s energy system.” Negative emotions can give rise to physical and behavioral problems. By tapping on specific points while keeping the problem in mind, the negative emotions are cleared, often in a rapid and dramatic way. Unlike acupuncture, you use your intention and focus to direct which particular problem you are working on.

Meridian Therapies are easily adapted to remote or proxy (surrogate) use. Clients can easily learn the technique in a few minutes, and apply them to their animal companions. We’ll look at the human technique first.

In EFT, you first bring to mind the problem. If it is a large or deep-seated problem, such as a phobia, it is best to focus on one specific aspect at a time. A big “global” issue like “litterbox problem” is not specific enough. Think of the problem as a forest: to get rid of the forest, you have to remove individual trees one at a time.

You next assess the level of the problem, or what practitioners call “Subjective Units of Distress” (SUDS). Basically, you decide where, on a scale of 10, the problem exists. For example, you may have a “7 out of 10” headache.

For people, there are often hidden rewards for behaviors or illnesses, rewards that may not even be consciously known. In order to clear the channel for healing, EFT uses the “set-up” statement, phrased this way: “Even though I have this (insert problem), I deeply and completely accept myself.” This is recited three times while either tapping continuously on the “karate chop” point or rubbing the “sore spot” (see illustration). To do the latter, place your flat hand on your chest, either left or right, just above your heart. Rub the hand around in a small circle while repeating the set-up statement. This releases lymphatic congestion in the area.

At each tapping point, you’ll repeat a key phrase summarizing the problem, such as “this headache.” This keeps the problem in the forefront of your mind and establishes the connection to the physical body through tapping.

After completing the tapping sequence, reassess your SUDS level. Usually, the problem will be greatly diminished or completely gone. If the level is lower but not zero, reformulate your set-up phrase with slightly different words, such as “this remaining headache,” and tap again. Usually, minor problems can be cleared up with 1 or 2 rounds of tapping.

Here is a simple 4-minute video on how and where to tap:

A. Focus Your Intention

Think about the animal and what specifically you would like to release, relax, soothe or change.

B. Make a Statement of Intent

Find a phrase or a sentence that describes the problem succinctly and clearly to you. You can say, “Sidney has this terrible allergy.” or “Sam never stops barking.” or, “This brown horse is distressed.” if you don’t know the animals’ name. This is the main part of directing your attention to the problem.

We surround the statement of intent with the words, “Even though (Sam) (is hyperactive), I deeply and profoundly love and accept (Sam).” It helps bring you closer to the animal for deeper changes and handles permission issues as well as having positive benefits for YOUR system. 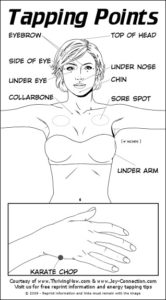 originally used an area called the “Sore Spot”(because if you press hard there it hurts!) It is in the area where all the lymph channels come together.

Nowadays that has been replaced by the “Karate Chop Point,” along the outside edge of your hand where you would hit something when doing karate. While continuously tapping the Karate Chop Point with the fingers of the opposite hand, say “Even though (insert name or description)(insert statement of problem), I deeply and profoundly love and accept (name or description)” three times.

In stubborn cases, using the sore spot may be more effective, so give it a shot if you’re having trouble resolving an issue. Place your flat hand on your chest, either left or right, just above your heart. Wait until you can feel the warmth of your hand through your clothes, rub the hand round in a small circle, and say the opening statement which is the statement of intent inside the blessing: “Even though (insert name or description)(insert statement of problem), I deeply and profoundly love and accept (name or description).”

Repeat the opening statement three times in all, continuously tapping the Karate Chop Point or rubbing the Sore Spot.

E. Tapping All the Points

We
now use a shortened version of the opening statement, called the Reminder phrase, and tap with one or two fingers, about 5-10 times, on the following spots (either side is fine) as we say the statement of intent on each point once:

In the shortcut technique, you use only the first seven EFT points, plus one other point on the back of the head, just below the crown chakra, which you pat with your open hand.

Using EFT on animals is easy!

Contrary to what you might think, we don’t actually tap on the animal. While animals do have meridians and points, the best way to do EFT for animals is by surrogate or proxy tapping. This means you tap on yourself to make the changes happen. This has significant advantages:

When finished with each round, take a deep breath in and out. You can continue to repeat the treatment with different statements – often something comes to mind as you do this. Different statements create different changes, so experiment with many different forms of wording and ways of saying something until you feel comfortable. For chronic physical or behavioral problems, many rounds over a period of time, exploring different aspects, may be needed.

Why does surrogate tapping work? When you focus your attention on an animal, you connect your individual energy systems together. When you then focus your attention on a specific aspect of that energy system (a problem, disease, behavior, etc.), and you change your system by tapping on the points, you are also changing the animal’s system through that connection. Thus, you tap on yourself, but you affect the animal.

EFT can be applied to a variety of physical and emotional problems. For example, aspects that a guardian might work with for a chronic sprayer could include: “Even though Fluffy feels a need to spray, I deeply and completely love and accept him.”

“Even though Fluffy feels his territory is being threatened ….”

“Even though Fluffy is stressed by the outside cats ….

“Even though Fluffy wants to mark his territory ….

“Even though Fluffy doesn’t get along with Muffy ….

“Even though I get upset when Fluffy sprays ….” (this and similar aspects address the guardian’s emotional issues, which can be a significant part of the problem!).

Try EFT on everything

This free, easy, effective technique should be available to everyone! Teach it to your staff, your clients, your kids – spread the word!

Update 5/15/12: EFT meets official standards for treatment of PTSD and more! A review published in the American Psychological Association journal, Review of General Psychology, states that 17 randomized controlled trials consistently demonstrated strong effect sizes and other statistical results that far exceed chance after relatively few treatment sessions. Criteria for evidence-based treatments proposed by Division 12 of the American Psychological Association were also applied and found to be met for a number of conditions, including PTSD.” What this means is that EFT is now proven and accepted as a valid, effective treatment for stress, trauma and, other human conditions. While it’s harder to “officially” assess EFT’s effects in animals, we know from experience that it works for them as well! Since our pets also reflect our stress, EFT provides a simple way to address our own and our pets’ emotional stresses to create a more peaceful, happy life for all!

Some of the material in this handout was adapted from “The Animal EFT Proxy Protocol” by Silvia Hartmann, at www.animal-EFT.org

Click here to learn how to apply EFT in your own life to resolve stuck patterns, old beliefs, and self-imposed limitations!