In a seemingly diabolical plot, veterinarians and pharmaceutical companies have teamed up in a marketing campaign to frighten guardians into giving year-round heartworm preventatives to their cats. They say they’re doing this to improve protection for individual pets, but the facts say they have other motives.

With few exceptions, heartworms (Dirofilaria immitis) are a completely seasonal problem, so there is no reason to give heartworm medicine to ANY pet year-round–except to make money for those who make and sell it! Those financially-motivated folks say the number of cases will rise unless everybody gives the medications. They rationalize this by citing statistics on how most people don’t use the products, and proclaiming that the number of unprotected dogs will surely cause even more disease. However, despite years of many animals being given unnecessary drugs and many more who aren’t, the prevalance of heartworm has not really changed.

Heartworms are transmitted by mosquitoes. Heartworm larvae, called microfilaria, live in the blood and are sucked up by the bug. Once inside the mosquito, they must further develop before they can infect another dog. For that to occur, outside temperatures must remain above 57 degrees F, day and night, for a certain period of time (but at least 8 days).

The warmer the temperature, the faster the larvae will mature. If the temperature drops below the critical level, larval development will stop, but the larvae don’t die—development will re-start at the same point when the weather warms back up. Larvae reach their infective stage in 8 to 30 days (the latter being the insect’s entire lifespan–if the larvae haven’t matured by then, they will die along with the mosquito).

It should be obvious that during seasons and in areas where there are no mosquitoes, there is no risk of heartworm. Evidently that little fact escaped the attention of the veterinarian who prescribed heartworm protection—in December–for a puppy living high in the Colorado mountains. At that altitude, temperatures are never warm enough for heartworms! 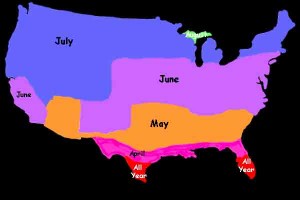 On this map,  heartworm risk is shown by the month when the use of heartworm preventatives should begin. In most states, protection should be continued through November or December. In the Michigan UP, preventatives are suggested from August through October. Within 150 miles of the Gulf Coast and other areas in pink, prevention is recommended from April through January. In the red areas of southern Texas and Florida, year-round preventatives may be needed. Local conditions may vary from year to year. Global warming, hurricanes/flooding, and other factors may increase the mosquito population and thus influence heartworm risk. (This map is a very loose approximation only, and is not intended to be used exclusively to determine risk.)

When an infected mosquito bites a dog or cat, the microfilaria are deposited on the skin, where they then crawl into the bite wound and enter the bloodstream. Inside the body, they grow and progress through other larval forms. In dogs, the heartworm’s natural host, larvae migrate to the heart and eventually develop into adult worms. In cats, full-grown worms can develop (but not reproduce). A cat cannot transmit the disease. Adult heartworms are over a foot long when grown (in 6-8 months), but it takes only 1 or 2 to fill up a cat’s tiny heart and cause serious problems. However, in 80% of infections, the cat’s own immune system kills the larvae at an earlier stage, and clears the infection.

However, heartworms don’t have to be full-grown to cause problems. In cats, a respiratory condition can develop. Not-quite-full-grown microfilaria can get stuck in the capillary beds of the lungs and cause significant inflammation and damage. This uniquely feline condition is called Heartworm Associated Respiratory Disease, or HARD. Symptoms are similar to asthma; and it’s possible that some asthmatic cats are misdiagnosed with an immune-mediated disease instead of a parasite. Even so, about half of infected cats never develop any signs of heartworm disease at all. And while the disease causes serious damage to the lungs, much of the damage may be reversible by the body’s normal healing processes. Chronic and sequential infections have not been studied.

Indoor cats are, of course, less likely to be bitten by a mosquito, but anyone who’s ever been around them knows that the little buggers can be quite persistent, so it isn’t impossible. In one study, 25% of heartworm-positive cats were reported to be indoors-only. Outdoor cats are at higher risk not only for heartworm but also for feline leukemia, feline immunodeficiency virus (FIV or feline AIDS), and all the other parasites, injuries, and diseases common to outdoor cats.

Heartworm preventative drugs do not kill adult heartworms, but they do kill microfilaria up to a certain stage of development. Currently it is believed that larvae under 6 weeks old are affected. This means that in order to prevent heartworms from reaching adulthood, the preventative can be given up to 6 weeks after the mosquito bite and still work. The recommendation is to give the drugs every 30 days, purportedly because once-a-month dosing is easier for most people to remember (and, coincidentally, it also sells more drugs).

The most common preventative drugs for heartworm are ivermectin (Heargard®) and selamectin (Revolution®). While these drugs are generally considered safe and effective at the low doses used for heartworm prevention, there are always exceptions. Toxicity associated with ivermectin include depression, ataxia (balance problems or unsteady walk), and blindness. Selamectin is also used to treat ear mites and some worms; adverse reactions include hair loss at the site of application, diarrhea, vomiting, muscle tremors, anorexia, lethargy, salivation, rapid breathing, and contact allergy.

Most veterinarians hand out heartworm preventatives like candy; but there is a serious and growing problem of resistance of heartworms to these drugs. This means that we are selecting for “superworms” that will be able to survive and grow even in animals on heartworm preventatives. As with all cases of drug resistance, the correct response is to reduce use of the drug and reserve it only for when it is absolutely necessary. Unfortunately, the veterinary profession and drug industries have decided to go for profits instead, and are continuing to call for all pets to be on medications all year round. This is bad science, and it is bad policy.

If you do use heartworm prevention products, get them from your veterinarian. Surveys have found mislabeled, expired, imported, and counterfeit products being sold from other sources. Follow dosage instructions and do not over-treat. NEVER, EVER use a heartworm product made for dogs on a cat. The components are different between dog and cat products, and dog products can kill a cat in a matter of hours. Many cats have suffered and died this way.