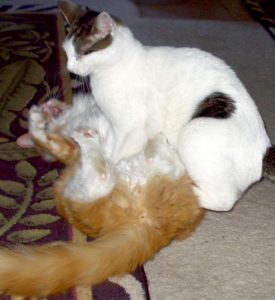 Brothers having a slight disagreement

Aggression in cats is not uncommon, but it’s unusual for it to be serious enough for people to seek professional help.

Just a decade ago, however, a study from Cornell University noted an upward trend in people-directed aggression. Those researchers thought it may be attributable to an increasing tendency to keep cats inside the home (and thus interacting more with people). Other possible explanations: cats are actually getting more aggressive (a bad thing), or people are becoming more aware that feline behavior problems are amenable to treatment (a very good thing!). Most likely, it’s a combination of factors.

With cat-to-human aggression, the roots almost always lie with the person. Cats who, as kittens, were played with or handled roughly by one or more people, and people who don’t understand cat behavior and unwittingly encourage aggressive behavior, are most often to blame. Our resident behaviorist Jackson Galaxy has featured many such people on his Animal Planet TV show, My Cat From Hell. However, pain and other medical conditions can also trigger aggression, so don’t neglect that all-important veterinary check-up!

Feline aggression is absolutely treatable; but to do it right may take considerable time and effort. Indoor enrichment to help stave off boredom and expand territory is a good first step. Exercise is a great way to burn off energy that might otherwise be directed inappropriately. (A cat exercise wheel is a great product for that!) Flower essences can be extremely beneficial for these kitties. They help the cat assess problem situations a little more rationally, by dissipating the cloud of rage or terror that cats can generate in a nanosecond. In extreme cases, a trial of medication may be needed while other behavioral methods are introduced.

Cats are both predators and prey; in multi-cat homes they have a social hierarchy; and they are very territorial. Understanding these instincts will help you see the world through your cat’s eyes, and understand why certain situations elicit certain aggressive reactions. While serious aggression can and should be treated by a professional, here’s a little rundown of the most common behavioral mischief in the cat repertoire.

Play/Predatory aggression involves the cat’s normal hunting and killing behaviors. In many cats, their play becomes too aggressive because their human companions encouraged that behavior when they were young. Rough-housing with bare hands is almost irresistible when kittens are small. Everyone loved that video of the “surprised kitten” on YouTube–who wouldn’t? Unfortunately, that’s a good way to teach a kitty that bare hands are (a) threatening, and (b) okay to bite and scratch. It’s adorable when they’re tiny kittens, but when the attacker is 15 pounds with inch-long fangs…not so much! For many adult cats who still play inappropriately, or turn their predatory drive on humans or other animals in the home, the underlying problem is usually boredom and excess energy. Cats who are especially territorial may be also more prone to predatory aggression. To correct the problem, never play roughly with your cat, but more importantly, institute regular sessions of Play Therapy.

Petting-related (overstimulation) aggression is frustrating and frightening. One minute you’re having a cuddly moment with your sweet furball, and the next minute the cat is going in seven directions at once, and you’re left bleeding from multiple bites or scratches. Cats are highly sensitive creatures, and it may be that there’s just so much stimulation the cat can take; or there are certain “off-limits” areas that are certain to draw blood–from you!–if you stray too close. There may be a pain issue, or a bad memory, but whatever the reason, very few cats attack without warning, though it may seem that way. It’s important to become an expert in feline body language. Widening or “blackening” of the eyes (dilated pupils), ears turned or laid back, twitching tail, whiskers flattening against the face; these are all signs of impending doom. The trick is to STOP before the cat feels it necessary to take the next step. Never try to restrain the cat! Gently remove all of your vulnerable body parts from the vicinity; or if that’s not possible, try using distraction to shift your cat’s attention to something that can’t be hurt, such as a toy, throw pillow, or rolled-up socks. (Be sure to leave such items in strategic locations around the house so there’s always one handy.) And, of course, Play Therapy will help diffuse some of the stress and anxiety that may be contributing to the cat’s sensitivity.

Redirected aggression occurs when the cat becomes frightened or upset at something, but rather than run or go after the real cause, the cat instead turns on the handiest target. Often this innocent victim is another cat or pet in the home, or the guardian. Thereafter, the mere sight of the victim brings up all that upset all over again, and the aggressor continues to attack. If the issue is between two cats, the best course of action in this case is complete separation followed by gradual reintroduction, as if the two had never met. Of course, Play Therapy will also help. It gives the aggressor an acceptable outlet for her frustration, and it restores the victim’s confidence.

Fear-induced aggression is something all veterinarians are very familiar with (see this video for a good example; no comment on the multiple vaccines without an exam!); it’s something we just hate to see come through that door! Fear aggressive cats operate on the theory that “the best defense is a good offense.” These cats can get pretty offensive! But fear aggression can occur in any situation where the cat feels both threatened and trapped. The sympathetic nervous system kicks in with the “fight or flight” reflex; if there’s nowhere to flee, the only option is to fight. A fear-aggressive cat is extremely fearsome in itself; this is a cat that can hurt you, badly. Be very careful! Once again (you’re getting the idea, aren’t you?) Play Therapy will help with the cat’s overall level of anxiety, not to mention wear him out!

Intact cat aggression includes both maternal aggression (totally normal behavior in a new mother when defending her kittens), and territorial tomcat aggression. Intact cats, both male and female, tend to be more aggressive as well as highly territorial; and they are also apt to spray urine on any and all convenient surfaces. The solution: spay/neuter, of course!

Pod-cat aggression occurs when one cat has been out of the house, whether to the veterinarian, groomer, or other destination, and when he returns home, the other cat(s) act aggressively toward him. My theory is that, while cats rely primarily on vision to identify other cats, smell also plays a big role. When the returning cat looks the same but smells different (from shampoo, anesthesia, etc.), the conflict creates suspicion that he’s an alien, and must be driven out. (If you don’t get the reference, see the classic movie, Invasion of the Body Snatchers!) People also report success putting a drop of vanilla extract on all the cats; I haven’t tried it, but lots of folks swear by it. Temporary separation may solve the problem; but occasionally there needs to be a complete reintroduction. You can use flower essences all around, too.

Feline aggression is no joke, especially if it’s threatening the cat’s home–or life. It’s a lot easier to fix a problem early than after the behavior has become entrenched. Don’t just “put up with it” until you snap. That’s not fair to anyone! Regular Play Therapy will prevent many behavior problems from developing in the first place, so establish that routine as soon as your new cat enters the household (though it’s never too late to start!). And no matter what, please do not even consider declawing as a solution; experts believe that declawing tends to make an aggressive cat more aggressive; and a cat bite is much more serious than a scratch.