Choosing an Omega-3 Oil for Your Pet

You may already know how important Omega-3 fatty acid supplementation is for dogs and cats. I consider it to be the #1 most important supplement you can give your pet.

The anti-inflammatory effects of Omega-3s EPA (eicosapentaenoic acid) and DHA (docosahexaenoic acid) have been thoroughly researched. Omega-3 supplementation has proven to be beneficial for dogs and cats for a wide variety of conditions, including chronic kidney disease(1), arthritis(2), allergies(3), and skin and coat problems(4).

Veterinary experts recommend up to 1000 mg/day of EPA/DHA to treat cancer, autoimmune, and other inflammatory conditions. This is actually quite difficult to accomplish. Many fish oils claiming a high level contain filler oils, or require multiple capsules per day to achieve it. For example:

The other issue with Omega-3 oils is the form. The natural form of Omega-3 is as triglycerides, but  manufacturers must esterify the oil during processing. Most leave it that way, since it costs more to put it back to its natural form. The body must re-convert the esters to triglycerides to utilize it. There is currently an effort to utilize a phospholipid form as well. However, to date, research suggests that all forms of Omega-3 are more or less the same in terms of absorption.

So, do you know how to choose the best Omega-3 supplement?

Let’s look at the main sources of Omega-3s on the market:

The vast majority of plant-based oils are in the form of Omega-6 fatty acids, which are already over-supplied in our pets’ diets. In addition to Omega-6, flaxseeds  and a few other seeds and nuts also contain the Omega-3 alpha-linolenic acid (ALA). ALA has beneficial effects of its own, particularly on skin and coat health. However, after weaning, dogs and cats (and humans) cannot convert more than 1-2% of ALA into EPA and none to DHA (the essential fatty acids that are so important to health)(5). Only marine oils contain these particular Omega-3s in a completely bioavailable form.

Many people are confused about this product, but there are no Omega-3s in coconut oil. Read more about coconut oil here.

Most species of algae naturally produce DHA, but very little if any EPA. In order to obtain a better balance, some species have been genetically selected to produce more EPA.(6) However, algal oils may also contain Omega-6 fatty acids, which are undesirable because they tend to promote inflammation. While algal oil is a valid choice for vegan individuals, dogs and cats are not (and should not be) vegans, and should get their Omega-3s from an animal source.

Like algae, squid naturally provide more DHA than EPA. Of the nine fatty acids found in squid, DHA is the most plentiful, while EPA comes in fourth. It takes twice as much squid to produce the same amount of oil as fish.(7)

Some squid oils are “supplemented” with other Omega-3s, but this may consist primarily of vegetable oils containing the Omega-3 alpha-linolenic acid.

While DHA is important during fetal development and for maintenance, EPA is the anti-inflammatory Omega-3 that is most important for our pets, especially as they age.

Squid are closely related to octopi and are just as intelligent. While they were previously caught by single line; now large nets are deployed to satisfy the growing demand. Squid are also now being farm-raised, with all the issues of pollution and humane treatment that implies. Squid oil is typically made from the waste products of squid processing.

Fish and cod liver oil are the most common and popular sources of EPA and DHA. However, these can be surprisingly problematic.

Most salmon oil (and all salmon products from the Atlantic Ocean, Scotland, and Norway) comes primarily from farm-raised salmon. These factory-farmed fish are grown in polluted, overcrowded pens(8); they are heavily vaccinated(9), and fed dyes, antifungals, parasiticides, and antibiotics(10); and they contain up to 10 times more mercury, dioxins, PCBs, and other toxins than wild fish(11,12). Farmed salmon also pose a serious threat to wild species in both Atlantic and Pacific oceans from interbreeding of escaped fish(13), parasites (14), and disease(15).

Additionally, up to 80% of “wild-caught” salmon are not truly wild, but bred and raised in hatcheries. Their release into the ocean threatens both wild salmon, and other fish(16). Oil from farmed fish also contain similar Omega-3s but far more Omega-6s than wild fish(17).

Cod liver oil is commonly supplemented with Vitamins A and D at levels that could easily become toxic in cats and dogs(18). Moreover, a loophole in the law allows non-cod species to be labeled as cod.

There are also oils made from other fish, such as menhaden–a threatened keystone species, and the source of most unspecified “fish oil.” Sardine, herring, and anchovy oils are more sustainable and cleaner than most other fish oils. While it’s best to use a product made specifically for pets in order to avoid the additives found in human products, many pet products are quite low in potency, and may not be sufficient for your pet’s needs.

It may be relevant that all fish die from suffocation when caught, which is neither instant nor painless.

If you do want to use a fish-based oil, I recommend Nordic Naturals, whose quality I trust.

Krill oil is a non-fish alternative Omega-3 product that is gaining in popularity. Krill (tiny shrimp-like crustaceans), are the keystone species–the foundation of the Antarctic food chain for many marine animals, including fish, whales, seals, squid, and birds. Krill are utilized for oil, as well as being processed into food for farmed fish. The global biomass of krill is enormous, and krill oil promoters claim that it’s impossible to over-harvest it. On a global scale, that may be true; but the problem is that they are being harvested in and around critical feeding grounds of the animals up the food chain that depend on them. This is already causing local areas of depletion, threatening dozens of species of fish, seabirds, and mammals, including whales, which are already at higher risk from melting ice packs and warming sea temperatures.(19)

Moreover, recent research shows that climate change is moving krill populations south, disrupting the life cycle of seals and other animals. Adelie and chinstrap penguin numbers are falling sharply due to the reduction of krill. Warming ocean temperatures and reduced sea ice are also adversely affecting krill egg production and larval survival. The last thing these animals need is competition for their main food source. But because the region where penguins live is also where the largest population of krill is located, this is exactly where krill harvesting is occurring. (20, 21)

New Zealand greenlip mussels (Perna canaliculus, GLM) are grown under a Sustainable Farming Program that ensures the long term viability of the greenlip mussel industry, with minimum impact on the environment. GLM are bi-valve mollusks with proven value for canine arthritis.(23) GLM provide a rich source of 33 fatty acids, of which 5 are Omega 3s (including essential Omega 3s EPA, DHA, and alpha linolenic acid). One of GLM’s unique array of Omega 3s is ETA (eicosatetraenoic acid). ETA–which is not found in any other food to any measurable degree–has extremely powerful ant-inflammatory properties and is beneficial for the heart.(24) GLM oil has less saturated fat, and more mono- and polyunsaturated fats, than fish oil or cod liver oil.

In contrast to many marine oil products, MOXXOR is cold processed. As a result, it contains a higher level of “polar” fatty acid molecules (which readily form bonds with surrounding tissues) than other oils, making MOXXOR more bioavailable. This, as well as the absence of fillers or carrier oils, is what allows a very small GLM oil capsule to contain more antioxidant power as the larger Krill oil capsules and gigantic fish oil capsules.

In order to ensure freshness, the mussels grown for MOXXOR are chilled and processed in a facility built on the shores of the sound where they are grown. In addition, the other two components of MOXXOR, Sauvignon Blanc grape seed husk extract and kiwifruit seed oil provide additional antioxidant power, including all 8 members of the Vitamin E family. These ingredients also safeguard MOXXOR’s freshness and stability by scavenging the oxygen free radicals that cause rancidity. 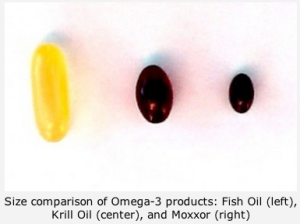 MOXXOR comes in a very small capsule, making it easy to give even to small pets. This photo shows the difference between a gigantic fish oil capsule (on the left), a krill oil capsule (center), and a capsule of MOXXOR (on the right).

Additionally, MOXXOR’s mild taste is generally well accepted, even by the fussiest of cats and dogs. In fact, some dogs will even eat it as a treat.

For all these reasons, I believe that MOXXOR is the ideal Omega-3 fatty acid supplement for pets (and people).