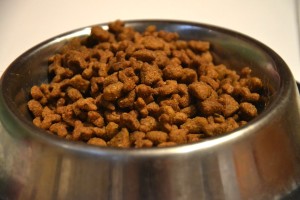 No matter what it says on the label, it’s probably chicken.

Are pet food makers lying to you?

Multiple studies reveal that manufacturers aren’t careful about handling their ingredients, and in some cases are outright deceptive about them – and this has serious implications for pets with food allergies.

Since it became possible to test for DNA in processed pet foods a decade or so ago, there have been several published pet food studies with very disturbing results.

The newest study [Okuma 2015] is the most horrifying. It suggests that you have only slightly better than even odds (about 60:40) that the food you buy actually contains what is listed on the label. Of tested foods:

The study found thet chicken was the most common unlabeled ingredient. Unfortunately for you and your pet, chicken is also the #1 most common allergen in dogs and cats. If you’re trying to avoid chicken in your pet food purchases… well, good luck with that!

I’m a member of a veterinary nutrition organization that has an email discussion group. When this study came out, I asked the group what the heck was going on here? I got very few responses, but one really surprised me. Essentially, this expert  blamed the problem on “cross-contamination.” For example, there might be a big pile of chicken meal in a warehouse next to a big pile of pork meal, so naturally the air currents will blow one onto the other, and a very very sensitive test (like the DNA tests used in the study) will find even a few little molecules that might happen to drift from one to another. Or, perhaps manufacturing machinery or transport trucks and railcars might not have been thoroughly cleaned (or, evidently, cleaned at all!).

This is wrong on so many levels.

And it doesn’t explain how a product can contain ZERO of what it claims on the label.

This is called adulteration and/or misbranding, and it violates a host of federal and state laws.

But as bad as this is, it’s even worse for our friends across the pond. A similar study was done in the UK, where labeling laws are pretty bad. Major ingredients fall into two categories: “meat and animal derivatives,” and “vegetable derivatives.” Yum! But even by those incredibly loose definitions, a DNA sampling study found a similar range of problems. “A major finding was the relative abundance of proteins from unspecified animal species in 14 of the 17 products… Only two of the seven were found to contain more bovine DNA (>50%) than pig and chicken DNA combined.”[Maine IR, Atterbury R, Change KC. Investigation into the animal species contents of popular wet pet foods. Acta Veterinaria Scandanavica. 2015;57:7.]

Technically, all the tested foods complied with labeling laws, but the socially sensitive authors expressed a concern not only for allergic pets, but also for families whose religious beliefs prohibit certain meats from entry into their homes.

Unlike the US studies, the UK team quantified their results, so there can be no excuses about dirty trucks, or air currents in a warehouse. Also unlike the U.S. studies, brand names were specified. For example, Hill’s Prescription Diet r/d Feline Weight Loss claimed chicken on the label, but was found to contain ZERO chicken. Fascinating… especially when you consider that Hill’s personally assured me that it the food it ships to Europe is identical to the food it sells in the US.

I can hear you asking now: what can we powerless consumers do about this corporate madness? Fortunately: a lot! Start by signing these two online petitions that need a lot of signatures as quickly as possible:

Please take a few minutes to sign both, and please distribute this information widely — to Facebook, Twitter, friends, and family. To trigger action, the White House petition must receive 100,000 signatures by July 5, 2015. This is asking a lot, so please help!

AAFCO will be discussing these issues at its upcoming meeting in August. Please help us show them that this issue is important to consumers; and that we want them to do their job and protect our right to know what is in the products we buy!

For Part I of this 2-part series, click here.

Dr. Jean is an official advisor to AAFCO, the organization that sets the standards for pet food. It’s extremely important for her to be at the meetings, which are held twice per year around the country, in order to participate in committee meetings, gain appointments to working groups, and be a strong voice for consumers and pets against the powerful pet food lobby. But these meetings are very expensive to attend. Please help support this important work with your donation of any size – every little bit helps!